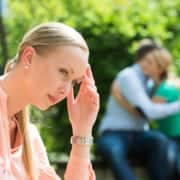 When it comes to dating and romantic intimacy, all anxieties are not exactly the same; they’re certainly related in a variety of ways, but the different forms of romantic anxiety each have distinct differences. Just to name a few of these fears:

For some people, the idea of making a commitment is overwhelming. They feel the responsibility as a burden rather than as an exciting connection with another person. Quite often, this particular fear is rooted in one or more of the other fears we will discuss in this article. For some, making a commitment means committing to a lifetime of fear and uncertainty.

While there are certainly people who do not like public displays of affection or even are not comfortable giving/receiving a hug or kiss, a fear of affection/intimacy goes beyond this. It means that there is an associated fear of connecting with other people at a deeper level, then cementing this uncomfortable reality with a physical expression. Sometimes, people are uncertain of how to show intimacy correctly; they can be uncertain of if they are a “good kisser,” or if they are “too intense” or too “clingy” in their attempts to show affection.

Fear of loss of independence

Most common in men, a fear of losing one’s independence frequently means that there is a misunderstanding of expectations in a relationship. Sure, there are people who require more time together or more communication, but a good match for a person will strike a comfortable balance that allows for independent expression. Most often, people like having some time away from each other to cultivate their own hobbies friendships. This is ok as it keeps both people growing a developing as people, and offers the other person a chance to continually learn about their partner.

Fear of being loved and accepted

For some, being loved and accepted simply for who they are is so unfamiliar that the idea of dating is terrifying. This particular fear can also be connected to childhood abuse where “love” was expressed in vastly inappropriate ways (sexual abuse, violent discipline, etc.); for these folks, it is no wonder that avoiding a loving relationship seems to be a matter of survival.

Fear of being overwhelmed

For a variety of reasons, some people experience the emotional rollercoaster of romance as completely overwhelming rather than as exciting and fun. The emotions they experience can flood them, and what most would call “excitement” feels more like anxiety to them.

For some men, the idea of sexual performance is complicated by having to maintain an erection, and not being able to ‘fake’ orgasm. For some, should there be an issue once or twice, then even the idea that sex may happen later begins to build the very anxiety that caused performance issues in the first place. It can be very circular, but there is help.

Fear of having to work too hard

This isn’t really a matter of being lazy; it’s more related to a fear of actually succeeding in a relationship and being ‘obligated’ to give up the single lifestyle, ‘obligated’ to do all of the small and large things that make a relationship work. But the fear is not based in reality . . . you do not have to be “on duty” 24/7! As a matter of fact, you should have your own interests, your own life to enjoy! But a fear of dating and romance is often fueled by this idea of having to be on duty 24/7.

Fear of making a mistake in who you pick

We’ve all heard the saying that people tend to seek out partners that remind them of one of their parents. When this sinks in, people sometimes become fearful of actually picking somebody like their mother or father, particularly if there was a painful relationship with them growing up. But parents are not the only source of this fear; having a series of relationships that end badly can also trigger this fear, “What if I choose somebody like that again? I don’t know if I could handle it. . .”

The fear of hurting somebody’s feelings by breaking up with them is also a very real contributor to avoidance of dating due to picking the wrong person. We deal with this in the next section (Fear of being hurt or hurting somebody else).

Fear of being hurt or hurting somebody else

Nobody wants to be rejected, of course. But for some, the experience is so painful that they believe that being alone is less painful than rejection. One of the most common reasons for this is that for some, rejection means that there is something wrong with them . . . that they can’t date “correctly,” or that repeated rejections are “proof” that they are unlikeable, unattractive, or unworthy of dating

There is help for this. Using a mindfulness-based approach, people can notice that rejection is more about the preferences of the other person than a commentary on the person being rejected. I can almost hear some readers saying, “Sure, I get that logically . . . but it’s not that easy to not be devastated by rejection.” I get that. And it is a gradual process, quicker for some, slower for others, but if you start today, you’ll be closer to the happy place where you can begin to enjoy dating.

Fear of rejecting somebody

And while being rejected is difficult for many, the idea of hurting somebody else’s feelings is even worse. This is common among people that experience heartbreak acutely, and who tend to be very empathetic (even overly empathetic). For a kind-hearted person who has been devastated by heartbreak, putting another person through that experience is terrifying not only because of empathy but also because of anticipatory guilt where they feel the guilt of hurting somebody’s feelings before even starting to date. This is closely related to anticipatory anxiety.

Fear of the unknown

See anticipatory anxiety. Fear of the unknown includes questions like:

Fear of the unknown is full of the “What if’s” in life and keeps us from living in the now. When we dwell on past pain or ruminate on potential future heartbreak, we are missing the only moment where life actually exists: Right NOW!

Please get in touch if you are tired of living in fear of dating. It can be dealt with, and you deserve it!

Learn more about Counseling for Anxiety in Austin.

Help! Teenage Depression!
Scroll to top
We use cookies to ensure that we give you the best experience on our website. If you continue to use this site we will assume that you are happy with it.OkPrivacy policy