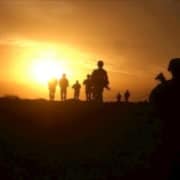 In case you have not read my other posts on Post-Traumatic Stress (PTS), I’d like to begin by clarifying that just because somebody has gone through a trauma does not mean that they have a “disorder” (as in PTSd or Post-Traumatic Stress Disorder). A soldier returning from combat may or may not show symptoms of post-traumatic stress (PTS), but if they do it does not mean that they have PTS-d (that’s the disorder). PTS (no ‘d‘) is simply a set of symptoms describing a specific form of stress.

There are 5 basic categories of psychological acute traumatic stress symptoms:

Physical symptoms are based on the activation of the sympathetic nervous system (the “fight-or-flight” response) and include surges of:

Psychological and physical symptoms begin and may get worse after a traumatic event like violence, natural disaster, or even witnessing a traumatic event. It is the perception of severity that causes the traumatic stress. Remember, these can be triggered even if the event is not actually life-threatening because your perception defines your reality.

These are the same symptoms as the acute symptoms above, but persist longer and may increase to include panic attacks, more vivid flashbacks, and more avoidant behaviors like total or partial isolation.

Why does delayed-onset PTSD happen?

When PTS symptoms manifest six months or more after a traumatic event. There are a variety of reasons for delayed-onset traumatic stress ranging from elaborate coping mechanisms of the unconscious mind, to the conscious repression of feelings and thoughts about the trauma itself, particularly when drugs and alcohol are involved in numbing the brain. Those that have experienced trauma before the most current event are sometimes sensitized to the effects of stress in general, and therefore may become re-triggered more than 6 months after the event because of the increased sensitivity to stress, including traumatic stress. Paradoxically, those that have experienced recurrent trauma may also become skilled at adapting to the initial symptoms of traumatic stress and thereby delay the full-impact that may arise later if re-triggered.

Delayed-onset traumatic stress occurs about 25% of the time when PTS symptoms are present AND have been experienced previously (this would suggest a re-triggering effect, often related to new stressors like job loss, relationship loss, etc.). This is a driving reason behind why getting debriefed within 48-72 hours of a trauma is important. Even though these symptoms may not reach clinical criteria for a diagnosis of PTSD until after 6 months, most often, symptoms like depression, anxiety, and invasive images are present in lower levels immediately after the traumatic event; this frequently is what drives avoidance and self-medicating that may cause the delayed full impact of PTSD (whereas dealing with the trauma sooner can actually prevent symptoms from becoming clinically diagnosable as a ‘disorder’).

A multiple-incident trauma occurs when a person experiences a series of traumatic events. This can happen in rapid succession, or, for example, over the course of an abusive childhood that spans years but where the abuse is not necessarily daily (although many would correctly argue that the emotional trauma of living in fear would be daily).

Multiple-incident traumatic stress is often referred to as a “Black Cloud” trauma where the dark cloud of trauma seems to follow the person around.

Trauma recovery groups based on DBT and/or CBT are very effective for many people. Critical Incident Stress Debriefing and Management are based on these concepts and is especially effective when initiated with 48-72 hours of the traumatic event; however, treatments are still effective after this timeframe, so do not avoid getting help.

Other highly effective modalities for treating traumatic stress include:

Learn more about Counseling for Trauma and PTSD in Austin.

The Calming Breath for Relaxation
Scroll to top
We use cookies to ensure that we give you the best experience on our website. If you continue to use this site we will assume that you are happy with it.OkPrivacy policy